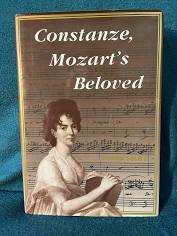 Was Mozart’s wife, Constanze Maria Weber, a flibbertigibbet spendthrift, prone to infidelity and an inappropriate spouse of a great musician? To read some of the opinions of the time, including, and especially by, Mozart’s father and sister, this would seem a fair assessment. Agnes Selby set out to test the veracity of these opinions, and in doing so unearthed a wealth of material which led her to a very different opinion of Mozart’s wife, a young woman whom Mozart described  in a letter to his father as:  She is not ugly, but at the same time far from beautiful…She has not wit, but she has enough common sense to enable her to fulfil her duties as a wife and mother. (25) He goes on to say that she has the kindest heart in the world and understands housekeeping. Maybe not the most romantic declaration of love and passion for his bride, but certainly a description which should have pacified most fathers.

Selby’s research was undertaken over a number of years, and took her from London and Salzburg to Vienna. She has divided the book into two parts. The first is called Constanze, Wife of Mozart, dating from the time when Mozart first met the Weber family until his death in 1791. We see a devoted couple, joined by their love of music as well as each other.  Constanze was an accomplished singer from a musical family and could appreciate her husband’s genius. Selby describes  Mozart’s  musical journey, his compositions and operas, travels and triumphs as well as the sadness of the death of four of their six young children. His death left Constanze grief stricken, while she dealt with a  number of  Mozart’s debts and the unfinished Requiem.

In the second part, Constanze, Widow of Mozart and Madam Nissen  Selby illustrates clearly the strength and abilities of  Constanze. She cleared the debts, organising concerts of Mozart’s music  arranged  the completion of the Requiem, so that the commission would be paid, foiled the efforts of Count Walsegg, who had commissioned the work, to pass the Requiem off as his own composition, and campaigned to keep the interest in Mozart’s music alive. In this she was aided by her second husband George Nissen, whose biography of Mozart was published in 1829.

In some ways the first part describing Constanze’s life with Mozart is the more interesting because there is so much detail about the music and Mozart himself. However, the second part rounds out the portrait of Constanze who is shown to be a woman capable of dealing with the world, and pursuing her goals. Without being overbearing, she does not allow herself to be diverted from the task in hand, despite indifferent health. Near the end of her life she wrote: I have had two great and splendid husbands who loved me and appreciated me, yes even adored me. They were both loved by me in the most tender way, and therefore I was twice perfectly happy…’(201)

Selby has documented her references with notes on each chapter an index and included photographs. The fruit of her research is not only the life of a capable, warm and accomplished woman, but also  a glimpse of the times in which she lived. While she may have been subjected to much unfair criticism Constanze proved to be, as described by Mozart, a woman with the kindest heart in the world.

The book can be ordered through Selby&Friends website. Agnes Selby is Kathy Selby’s mother.