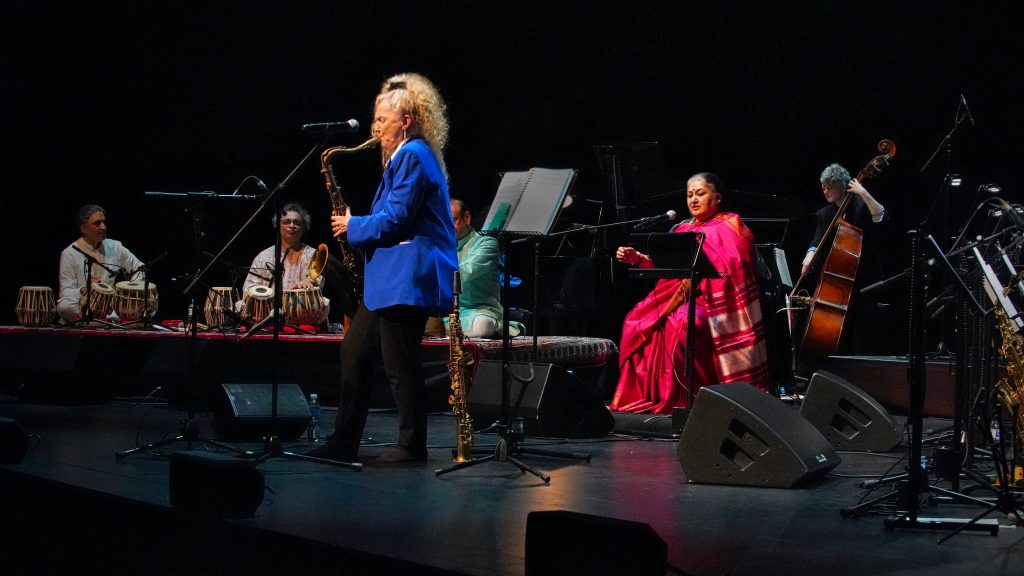 This was a remarkable performance. Originally performed as part of the Sydney Festival in 2019, this true collaboration between Australian saxophonist Sandy Evans, Indian vocalist Shubha Mudgal and tabla master Aneesh Pradhan, was brought back to life in what can only be described as a tour de force.

The aim to fuse the Indian tradition with big band jazz is, to say the least, a big ask. However, the three collaborators as composers and with Sandy Evans having the additional task of adding big band arrangements, succeeded in spades.

Aside from the fact that Evans arrangements for the big band were both sympathetic to Indian music and thus complemented rather than clashed, the real reason for such a powerful performance lies in the respect that the three leaders have for each other and their contributions, as was evident throughout this show. Added to this the vital role played by bassist Jessica Dunn as leader of the all-female Sirens Big Band. They were on song all evening and provided some great solos.

The original music that makes up “Bridge Of Dreams’ encompasses a vast range, from the obvious influences of the Indian and jazz traditions but there was also a touch of Latin and thus reviewer even heard a hint of Klezmer!

It is impossible to overlook the contributions of the three leaders.  Aside from his technical skill, Aneesh Pradhan added much whilst Aneesh Pradhan’s vocals were central to the music and Sandy Evans not only played some great solos, but also brought the whole show together as conductor.

This was a concert that should have appealed to both jazz, big band lovers and Indian music fans alike. The only downside was the fact that this performance was not sold out.