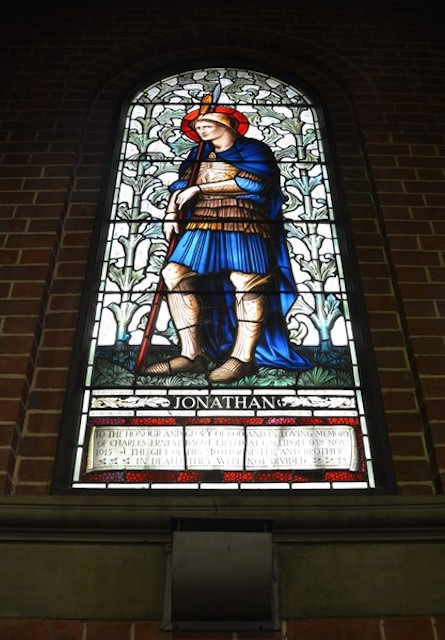 About one hundred people enjoyed a cultural afternoon at All Soul’s Church. There was beautiful Baroque music and the setting was wonderful too, with the William Morris stained glass windows and the display of exquisite quilts inspired by them, created by Michelle Hill. Suzette Crees gave an interesting talk about the windows and Graham Strahle gave insights into the Baroque instruments and their revival by the Dolmetsch family and their association with William Morris. Graham was a pupil of Natalie Dolmetsch.

But the centrepiece was music played by a dedicated quartet of excellent players. Their program included composers who all lived around the time of J.S.Bach and they all probably knew each other, but their styles were so different. Decidedly French but not rigidly so, Francois Couperin’s Suite La Francoise was a collection of dances, each with a different character.

As a harpsichord player Couperin gave his instrument plenty to do and Anne Whelan did it justice! The viola da gamba played by Graham Strahle was not only a Basso Continuo instrument, it had melody lines and variations in dialogue with the violin and flute. The wooden flute played by Andrew Gardiner had a lovely mellow sound that blended so well with the softer tone of Agnes Weinstein’s Baroque violin. The players were in perfect accord in this the most complex piece.

A flamboyant Italian, Pietro Locatelli studied with Corelli but left Italy to travel Europe and develop his virtuoso style. He ended up in Amsterdam and being a good businessman published much chamber music for the many rich amateur musicians of the town! This Triosonata was tuneful and cleverly devised with some interesting modulations and variations that kept the violin and flute on their toes!

It is amazing how the musicians of that time knew and influenced each other. A new style would spread through Europe and a new flavour would be introduced! Corelli had a huge influence on all string composers and Telemann in Hamburg modelled his six violin Sonatas on Corelli’s publication. Agnes Weinstein played the four movements with a lightness of touch and feeling for style and was ably supported by the continuo players.

As a friend of J.C.Bach, Carl Friederich Abel moved away from the more ponderous Baroque style to the more elegant classical style of the Dresden Court where Haydn’s Symphonies were performed. But Abel was a master viola da gamba player and his solo Sonata harks back to the typical compositions for that instrument. It is such a delicate instrument, one felt like holding one’s breath to better hear the 2-part melodies coloured by touches of harmony. Graham Strahle played the Adagio and Minuet exquisitely.

The last piece of the afternoon was by the lesser-known French woodwind and string player Jacques Hotteterre. His family were instrument makers and Jacques is said to have invented the 3-piece flute in use today. He also wrote the first manual for traverse flute. This Triosonate uses each instrument in the melody line and the variations and ornamentation were a feast for the ear. The players awareness of the intricate weaving of parts made the structure so clear and the blend of sound was excellent.

The venue was beautiful but maybe not so suitable for this kind of music. The carpet and the high ceiling tended to absorb the resonances and the harpsichord especially was often hard to hear. But it was still a most enjoyable concert and hopefully the first of many by this excellent Ensemble Vivante.