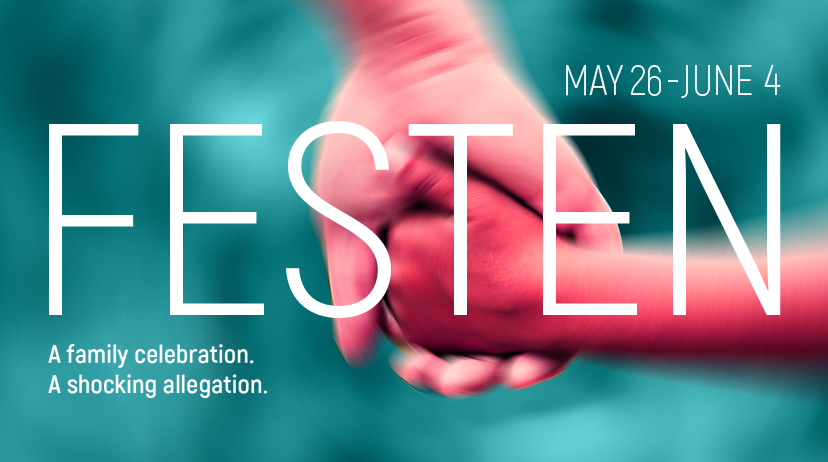 A  birthday party for a patriarch, where family and friends have gathered – what could possibly spoil the celebration? Apart from sibling rivalries and sycophantic friends, normally on the menu on such an occasion, there is added the poisonous element of an accusation of child sexual abuse. Reactions by the assembled guests  include disbelief and anger against the accuser. The final resolution comes about in a surprising way.

Festen demands a large cast, and in this production there is no weak link. Brant Eustice, playing Christian, the eldest brother, the successful one, in control, until by his revelations,  and accusations, induced by a lifetime of torment, he begins to unravel to the point of near catatonia gives a stellar performance.

The serious overtones of the play are underscored by the incongruity of the party guests dancing in a congo line, singing birthday songs and becoming increasingly drunk. Joh Hartog as Grandfather and Geoff Revell as Poul,  skilfully provide comic relief. The birthday man, Helge is the epitome of a successful man who believes his own publicity, while Else, played by Lyn Wilson, presents as the glamorous, supportive wife, devoid of any real empathy. She also demonstrates her pragmatism by going from the wife who chose to ignore what she saw, to choosing to remain with her family members who came to reject their father.

It is interesting that while child abuse is pivotal to this play, instances of domestic violence, as displayed by younger son MIchael, played for all his obnoxiousness, very effectively by Nigel Tripodi, is just part of the story. His overt racism against a guest Gbatokal played by Stephen Tongun is perhaps a distraction from the real message while adding to Michael’s character traits.

Pat Wilson has provided music, at times funereal, at times festive, which matches the mood of each moment. The set designed by Nick Fagan, who directed the play and stepped in to replace Stuart Pearce, unfortunately ill, to play Lars, makes excellent use of what is not the easiest space.

Once again Red Phoenix has demonstrated that they are a first class company, and hopefully they are given the support they deserve.