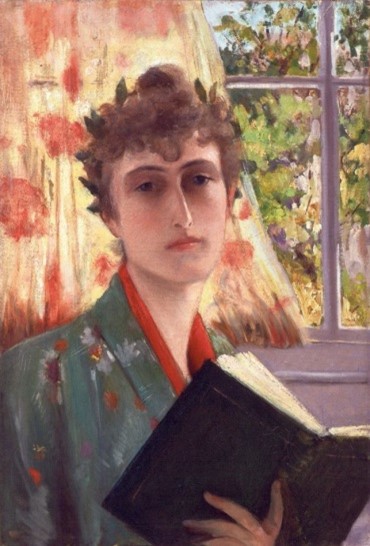 Born in 1865, Winnaretta Singer was the 20th of 24 children by five wives of Isaac Merritt Singer who was the co-inventor of the sewing machine and hence immensely rich. Her mother was Isaac’s Parisian-born second wife, Isabella Eugenie Boyer, who was herself the model for Bartholdi’s Statue of Liberty.

Winnaretta was born in Yonkers, New York but the family moved to France after the outbreak of the American Civil War. They moved on to England after the outbreak of the Franco-Prussian war in 1870 where Isaac built a 115 room mansion in Devon modelled on Le Petit Trianon. Naturally, being American, he called it “The Wigwam”. Today it’s known as Oldway Mansion in Paignton, Devon.

In 1886 when she was 21, Winnaretta gained full access to her inheritance of 1 million dollars and pursued her passion for contemporary classical music. In 1887, at her mother’s insistence, Winnaretta married Prince Louis de Scey-Montbéliard. It was unfortunate for both parties; Winnaretta was a lesbian and on the wedding night, the hapless groom came into the nuptial chamber to find Winnaretta crouched on top of a large wardrobe holding an umbrella and shouting at him: “lay a finger on me and I’ll kill you”. The marriage was annulled in 1892.

However In 1893, at the age of 29, she stepped companionably into a chaste marriage with the 59-year-old Prince Edmond de Polignac (1834-1901), a gay but broke amateur composer. It was the perfect match for both of them.

Although Edmund died in 1901, the salon in Paris which they founded subsidised and nourished a whole generation of composers such as Ravel, Poulenc, Saint-Saëns, Satie, Chabrier, D’Indy, Fauré and Debussy. Winnaretta meanwhile had affairs with Dame Ethel Smyth, Romaine Brooks, Violet Trefusis, Renata Borgatti and many others. Among the works she commissioned are Stravinsky’s Renard, Erik Satie’s Socrate (by her intercession Satie was kept out of jail when he was composing this work), Darius Milhaud’s Les Malheurs d’Orphée, Francis Poulenc’s Concerto for two pianos and his Organ Concerto, Jean Françaix’s Le Diable boîteux and Sérénade pour 12 instruments, Kurt Weill’s Second Symphony, and Germaine Tailleferre’s First Concerto for Piano and Orchestra. Manuel de Falla’s Master Peter’s Puppet Show was premiered in her salon, with the harpsichord part performed by Wanda Landowska and many more.

After Prince Edmond’s death in 1901, Winnaretta rebuilt her house on the rue Cortambert [today the “Avenue Georges Mandel]. The refurbishing included a grand salon seating 200, and a smaller atelier for more intimate recitals. It included two pianos and a Cavaillé-Coll chamber organ. Claude Debussy was one of the most popular composers in the salon of Winnaretta Singer. His compositions were featured almost every month between 1905-1907, and a number of premieres took place at her salon.

The young Ravel dedicated his celebrated piano work, “Pavane pour une infante défunte” to the Princesse de Polignac. Many of Proust’s memorable evocations of salon culture were born during his attendance at concerts in the Polignac living room and later included in his magnum opus “À la recherche du temps perdu” translated into English as “Remembrance of Things Past” or “In Search of Lost Time”.

In addition to performing as pianist and organist in her own salon, Singer-Polignac enjoyed some success as a painter; a number of her canvases were accepted for annual exhibitions of the Académie des Beaux-Arts. One canvas eventually appeared in the showcase of an art gallery, advertised as being a Manet. Her self-portrait appears at the head of this article.

After Singer-Polignac’s death, her legacy of enlightened generosity was carried on through the work of the Fondation Singer-Polignac. Created in 1928, the goals of the Foundation are the promotion, through gifts and bourses, of science, literature, the arts, culture, and French philanthropy. After Singer-Polignac’s death, the Foundation continued to present concerts and recitals in the Polignac mansion’s music room. The performances were first organized by Nadia Boulanger, who presented stimulating programs that juxtaposed early music and modern compositions. After Boulanger’s death in 1979, composer Jean Françaix took over the organization of the concert series.

Winnaretta died in England in 1943 while she was living with Avilde Chaplin who, believe it or not, was the daughter of the 1920s Governor of South Australia, Lt. General Sir Tom Molesworth Bridges.