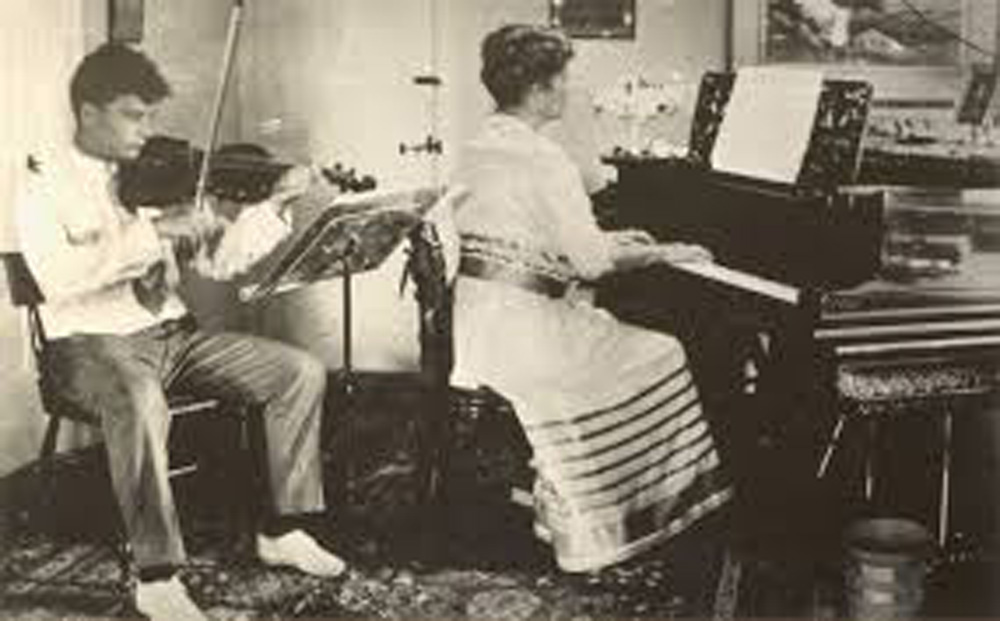 Elizabeth Penn Sprague was born in Chicago in 1864. Her father was a wealthy owner of a wholesale grocery supply business and young Elizabeth was brought up in an atmosphere where it was not expected that she would work. She learnt the piano and was talented but not gifted to the extent that it would be a musical career.

In 1891, she married Frederic Shurtleff Coolidge, just graduated from Harvard as an orthopaedic surgeon and she was the mother of one child.

Between January 1915 and March 1916, both her parents and her husband died and she, being an only child, came into a fortune of over 4 million dollars. Within a week of her father’s death, she gave $100,000 to the Chicago Symphony Orchestra to establish a pension fund. When her mother died some months later, she doubled that to $200,000.

In 1918, she established the Berkshire Music Festival just outside Pittsfield Massachusetts and built an auditorium as well as cottages for the musicians to stay. Then followed the Berkshire Quartet to allow for her passion for Chamber Music. Entry was always free and in 1919, she awarded the first Berkshire Prize for chamber music to Ernest Bloch.

Out of this grew the Berkshire Symphonic Festival at Tanglewood, which she also supported.

Sadly, and not unusually, the Berkshire Quartet disbanded in 1924 due to disagreements between the musicians.

Ernest Bloch, by now a friend of Elizabeth, persuaded her to invite Carl Engel, the newly appointed music librarian of the Library of Congress in Washington, to the 1924 Festival. Engel asked Coolidge what she intended to do with her considerable collection of manuscripts submitted for the Berkshire Prize. It did not take much persuasion for her to agree to hand them on to the Library of Congress. However, she also wanted them to be performed at the library and was dismayed when she was told that no performing space existed there. She wrote to Engel in October 1924 offering to build a concert hall at the library and to endow it perpetually for performances of music. No legislation existed for this to happen, so this remarkable woman pulled every string that she could and only 7 months later, President Calvin Coolidge [no relation] signed the necessary Acts into law.

The first concert was given in the new 500 seat concert hall in October 1925. It came complete with an external garden courtyard and a $20,000 pipe organ. From the beginning, the concerts were broadcast across America.

The concerts in Washington continue today financed by the Foundation that she endowed when the concert hall was built. The Foundation also continues to commission new chamber music.

She financed chamber music festivals and tours of musical groups in Europe until the mid-1930s.

In 1932, Coolidge established the Elizabeth Sprague Coolidge Medal for “eminent services to chamber music.” The medals were initially awarded by the Library of Congress. But, in 1949 after objections by U.S. Congressmen over the appropriateness of a government body awarding prizes in fine arts and literature to individuals who might harbor dissident views towards the U.S., further prizes were forbidden.

There is little doubt that Elizabeth Sprague Coolidge enabled chamber music to flourish in the USA.

Some of the music she commissioned is:

In person, Elizabeth Coolidge was over 6 feet tall and in later life, very deaf, which she coped with helped by various hearing aids and ear trumpets. Despite her deafness, she managed to practice the piano every day and frequently took the piano part with various touring players and groups – it is said without disgracing the performance. By all accounts, she was tireless and a formidable personality and feared no politician or person. She was usually successful in getting her ideas adopted.

In addition to her musical donations, she also donated much money to medical institutions and to medical research in deference to her husband’s profession.

She died in November 1953 aged 89 in Cambridge, Massachusetts. Her legacy continues on.