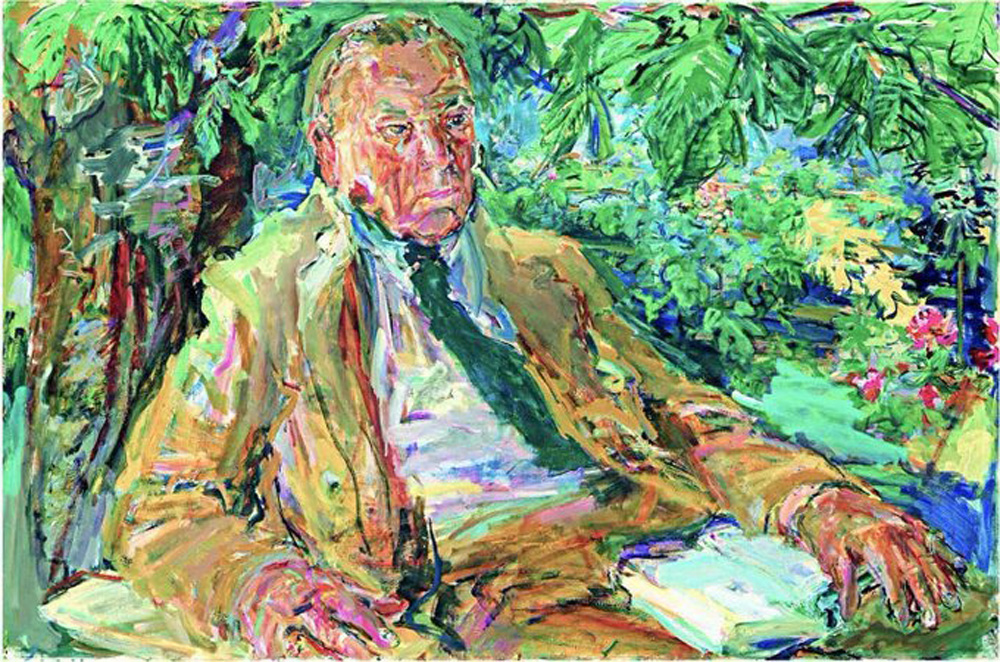 Werner Reinhart lived between 1884 and 1951. He was a Swiss businessman, philanthropist, amateur clarinettist, and a patron of composers and writers, particularly Igor Stravinsky and the poet and writer Rainer Maria Rilke. Reinhart knew and corresponded with many of the great names of the early-mid 20th century in the European artistic and musical world, and his Villa Rychenberg in Winterthur became an international meeting point for musicians and writers.

The family firm, which exists today as a Foundation, was Volkart, founded in 1851 in Winterthur, Switzerland, and Bombay, India, by the brothers Salomon and Johann Georg Volkart, with the intention of establishing direct commercial relations between India and the continent of Europe. The company imported cotton and other woven products as well as spices, tea and various Oriental goods and was the agent for exporting machinery and manufactured goods from Europe to India and Asia. The business was successful, and branches were established in Colombo (1857), Cochin (1859) and Karachi (1861).

When Johann Georg Volkart died unexpectedly in 1861, Salomon Volkart had to continue the business with partners outside the family. During this time, a subsidiary was founded in London (1868). Due to political and economic difficulties, frequent changes in the management of his company and his poor health, Salomon Volkart retired from active business activity in 1875 and only worked as a silent partner until his death in 1893.

Through the marriage of Lilly Volkart (1855–1916) to Theodor Reinhart, the business came into the hands of the Reinhart family in 1912. By 1926 the company had 80 branches in India and was thus practically the representative of Switzerland in India.

Theodor’s two sons, Georg and Werner, were also involved in the company.

In 1985, Andreas Reinhart took over the company in the fifth generation and became the sole owner of the company by buying out the remaining family members. Although the company still exists in Winterthur, it no longer actively trades, but it sponsors an artistic foundation and museum in Winterthur.

It would seem that Werner Reinhart never took an active part in managing the company but used his personal wealth to sponsor musicians and writers.

After World War 1 and the 1917 Revolution in Russia, Igor Stravinsky was isolated and without funds. He approached Reinhart for financial assistance when he was writing L’Histoire du Soldat (The Soldier’s Tale). The first performance was conducted by Ernest Ansermet on 28 September 1918, at the Theatre Municipal de Lausanne. Werner Reinhart sponsored this performance, and to a large degree underwrote it. In gratitude, Stravinsky dedicated the work to Reinhart and even gave him the original manuscript.

Reinhart continued his support of Stravinsky’s work in 1919 by funding a series of concerts of his recent chamber music. These included a suite of five numbers from The Soldier’s Tale, arranged for clarinet, violin, and piano, which was a nod to Reinhart, who was an excellent amateur clarinettist. The suite was first performed on 8 November 1919, in Lausanne, long before the better-known suite for the seven original instruments became widely known. Stravinsky dedicated his Three Pieces for Clarinet (composed October–November 1918) to Reinhart, in gratitude for his ongoing support.

Werner Reinhart and the conductor Hermann Scherchen played a leading role in shaping the musical life of Winterthur between 1922 and 1950, the emphasis being on contemporary music, and they were instrumental in numerous premieres being performed there. Scherchen was one of many people whom Reinhart patronised, not least in Scherchen’s case because he had to pay alimony to no less than five ex-wives.

It was thanks to Werner Reinhart that Anton Webern, who was living in political isolation in Austria, was able to attend the premiere of his Variations for Orchestra, Op. 30 in Winterthur in 1943. Reinhart invested all the financial and diplomatic means at his disposal to enable Webern to travel to Switzerland. In return for this support, Webern dedicated the work to him.

After World War II, Wilhelm Furtwängler and his wife Elisabeth escaped to Switzerland with the assistance of Ernest Ansermet and were supported financially by Werner Reinhart.

Max Reger met the young Australian violinist Alma Moodie in 1911. Alma was born in Mount Morgan, Queensland, in 1898. Mount Morgan today is a former mining town some distance inland from Rockhampton. She showed exceptional talent as a child and aged 9, won a scholarship to study in Brussels. Her mother accompanied her until her death when Alma was 20, her father having died when Alma was one. Alma was the protégé of various notable families including that of Max Reger, Prince Christian Ernst zu Stolberg und Wernigerode and then the violin teacher Carl Flesch [Flesch considered her to be his favourite pupil] and after 1922, Reinhart gave her a Guarnerius violin and arranged for her to attend and perform at many of the International Society for Contemporary Music (ISCM)’s festivals.

She championed the music of Hans Pfitzner and he dedicated his Violin Concerto in B minor, Op. 34 (1923) to her. She premiered it in Nuremberg, on 4 June 1924, with the composer conducting. Moodie became its leading exponent, and performed it over 50 times in Germany with conductors such as Pfitzner, Wilhelm Furtwängler, Hans Knappertsbusch, Hermann Scherchen, Karl Muck, Carl Schuricht, and Fritz Busch. Alma also premiered violin concertos by Kurt Atterberg and Ernst Krenek.

The Austrian composer Ernst Krenek married Anna Mahler (the daughter of Gustav Mahler) in March 1924, when Krenek was completing his Violin Concerto No. 1, Op. 29. Alma Moodie assisted Krenek, not with the scoring of the violin part, but with getting financial assistance from Werner Reinhart at a time when there was hyper-inflation in Germany. In gratitude, Krenek dedicated the concerto to Moodie, and she premiered it on 5 January 1925, in Dessau.In the meantime, Krenek’s marriage to Anna Mahler had collapsed, and their divorce became final a few days after the premiere. Krenek did not attend the premiere, but he did have an affair with Moodie which has been described as “short-lived and complicated”. He never managed to hear her play the concerto, but he did “immortalize some aspects of her personality in the character of Anita in his opera Jonny spielt auf“, the first ever Jazz Opera. Krenek also dedicated his Sonata for Solo Violin, Op. 33 to Alma Moodie in 1924.

Alma Moodie was considered one of the most important interpreters of Brahms’s works for violin. Hermann Reutter quotes her as saying “One must be at least forty to understand the greatness and depth of expression in Brahms’ music.” Reutter participated in many concerts with Alma Moodie, and dedicated his Rhapsodie for violin and piano, Op. 51 (1939), to her.

On 18 December 1927, Alma married Alexander Balthasar Alfred Spengler, a German lawyer, becoming the third of his six wives, and they had two children. They initially lived in Cologne. He was indifferent to her career, and she was tired from incessant travelling, so she performed less often after that. She taught violin at the Hoch Conservatory in Frankfurt, where she continued Carl Flesch’s teaching tradition. Spengler was often travelling abroad; when he was home, he was demanding and unfaithful. Alma took to drinking and smoking, and found that she needed sleeping pills. Later, her bow arm started to tremble uncontrollably, leading to more drinking and more sleeping pills.

Alma Moodie died on 7 March 1943, aged 44, during an air raid on Frankfurt, although the bombs were not the cause of her death. A doctor reported that she died accidentally of a thrombosis brought on by the mixture of alcohol and pills she had taken, but a number of her close friends believed her death to be suicide. Her obituary by the critic Karl Holl concluded: “Her violin playing has been silenced. But it leaves behind a ring of rare purity. Her name will always remain as that of a feminine personality in the history of music”.

After her death, Werner Reinhart became the guardian of her children. Forever in the shadow of Paul Sacher, Reinhart seems never to have married. He was perceived more as a silent sponsor whose extreme reticence, discretion and modesty are frequently mentioned in sources of the day. However, this should not detract from the outstanding position Reinhart occupied in the promotion of the European music scene.