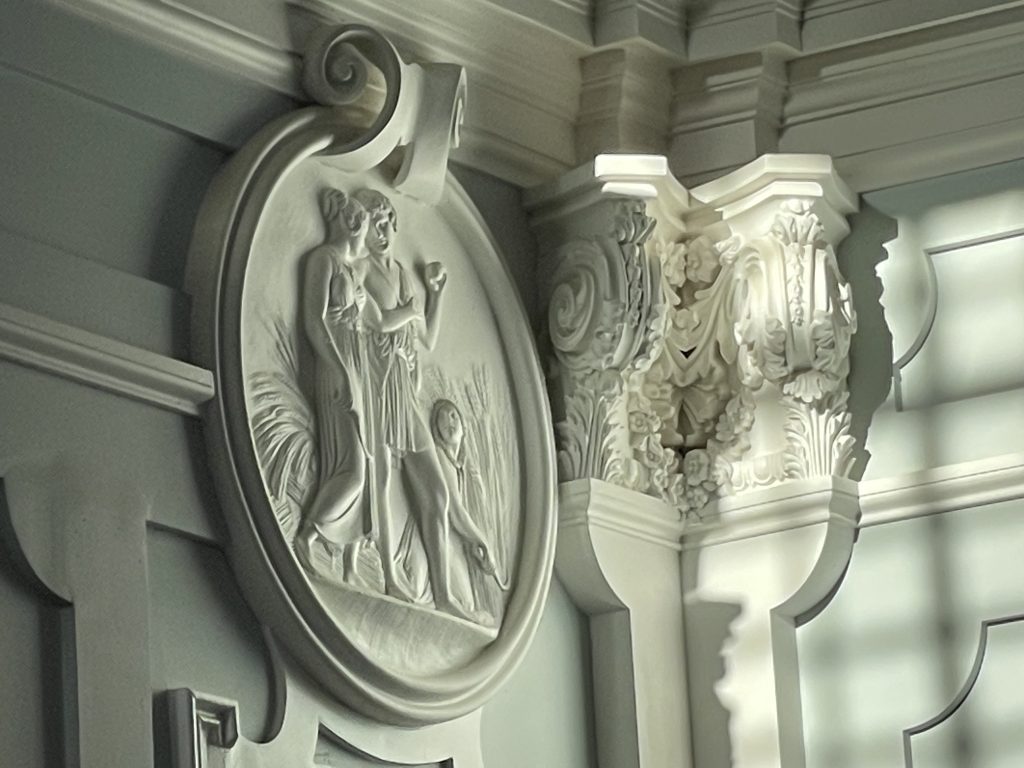 Graham Strahle reports on a concert given by Tarrawatta Trio in the newly completed North Adelaide Baroque Hall on 4 December, 2022

“Small is beautiful” was the renowned maxim of E. F. Schumacher, the British writer who advocated small-scale, human-centred economies as the answer for an overly complex, technological world. Though he didn’t suggest this himself, a musical analogy might be to say that the answer to the vast and impersonal auditoriums of our modern era comes in the form of smaller, more intimate performance spaces where music can regain its human scale.

You might never know from casually walking along Tynte Street, but tucked away in between Fellini Café (on the corner with O’Connell Street) and the heritage Fire Station is a gracious little bluestone terrace house with white iron lacework adorning its front veranda. The pink front door and high peaked roof behind should give it away next time you look. This is the home of the extraordinary new North Adelaide Baroque Hall, a private initiative that has aroused much interest and speculation over the past year.

An opportunity to see this place in all its glory came in the form of a private soiree that was held ahead of its official public launch, which is anticipated to happen early in the new year. Just 40 or so people were present, which is all the hall is meant to accommodate; and the performers were Tarrawatta Trio, itself a new group comprising oboist Celia Craig, cellist Thomas Marlin and pianist Michael Ierace.

Ensemble-in-Residence at Brighton Secondary School’s Specialist Music Department, their concert was apparently among the first to take place at North Adelaide Baroque Hall, so it is with some excitement that I can share what it was like.

Just to point out, though, there’s not a lot to say as far as the identities behind North Adelaide Baroque Hall. At least for the time being, its founder, a composer and pianist from Adelaide who lives and performs in Europe, has chosen to remain discretely away from publicity. But what we can confidently say is that this generous, philanthropically minded individual has done something truly astonishing for Adelaide’s musical life. Quite possibly it is unique in the whole of Australia.

It started, no less, with a vision to replicate the finest European eighteenth-century chamber halls in this fair city of Adelaide. The founder offered this statement in the printed program, which we may quote in full:

“This hall gives a chance for many Australians to see a circa-1720 rococo chamber hall without travelling to Europe or Russia, and exactly as a Peter the Great would have presented it when it was new. Whilst visiting the palaces of Genoa close to my home, I met a painter – Fabio Prati – working upon restorations of the most famous Genoese historical palaces. Prati conceived and painted the eight-metre by 11-metre fresco by hand whilst listening to my orchestral work… applying the skills and traditional techniques of his homeland of Genoa. You will find numerous musical references such as the Sirens from Greek mythology – half nymph and half bird. Their enchanting songs lured sailors to their death, but what is more touching – in showing the vital importance of music – is the rare sailor was capable of turning away from the exquisite music, then the Siren herself perished.”

Casting my eye around this hall’s opulent interior, I could not help could but think again of the words of Schumacher; that the answer to the present world’s problems are a return to “the organic, the gentle, the elegant and beautiful”.

It is like stepping into a rococo banquet hall in some Bavarian castle. The décor is a pale pastel blue with ornate white friezes and gilt chandeliers lining each wall. A bold chequerboard parquetry floor lies underfoot, while high overhead is Fabio Prati’s incredible ceiling, an elaborate bronze-gold fresco bearing ornate classical motifs. You could be walking into Margravine Wilhelmine’s famed music room in Bayreuth Palace.

A smart black Steingraeber & Söhne grand piano from Bayreuth sits in front of double glass doors where the performers enter. Aside from seating that is arranged in an arc around the performers, there is nothing else – no stage, no modern intrusions, and absolutely no fabric surfaces. Everything is designed with the acoustics in mind. Even before the first note starts, it is wonderfully alive with resonance the moment you enter from the front passageway. All the windows are triple-glazed to block out aircraft noise, we were told.

So to this Exclusive Musical Soiree, as the event was called. From hearing Tarrawatta Trio, one can say at the outset that this small, resonant hall puts a whole new perspective on chamber music. The overwhelming impression is how sensationally big and engrossing the sound is. The piano, a very even-toned instrument, sounded as clear and lovely as a piano could be. The cello and oboe were deeply resonant.

The trio’s program began with the third of Beethoven’s five cello sonatas, his Op. 69 in A major. Then came Felix Mendelssohn’s Songs without Words in an arrangement by Miriam Hyde, Clara Schumann’s Three Romances for Oboe and Piano, Op.22, Franz Schubert’s Scherzo in B flat, and Mikhail Glinka’s Trio pathétique in D minor.

Having performed alongside Tom Marlin a week earlier in Bach’s Brandenburg No. 6 hardly entitles me to make any judgements about their performances, so I will duly refrain from doing that. But as far as the sound we were experiencing as an audience, it was presumably exactly as the players themselves would have been hearing. The musical utterances were genuinely person to person – so close that every twitch of energy and expression could be felt in a physical way. To be any closer, you’d have to have climbed inside their instruments.

One can only reflect on how modern auditoriums erode that intimacy of communication, to one degree or another, by making it difficult for acoustic instruments to fill the airspace and separating the performer from the listener. North Adelaide Baroque Hall attempts to solve all that by returning to an age-old formula of recreating the same look, size and proportions of private chamber rooms that gave birth to chamber music in the first place.

What one can also say is that despite an acoustic as lively as this, the most surprising thing about North Adelaide Baroque Hall is that there is no boominess or sensation of the sound coming from all directions. While fabulously big, its sound is pinpointed and controlled. That 11-meter high ceiling evidently plays a key role in generating its prodigious acoustic.

As a longstanding admirer of Ukaria Cultural Centre since its opening in 2015, and having played there myself, I still believe that its glorious concert hall remains the benchmark as far as modern designs go. And its stage is considerably more flexible. Really, there is no comparison between the two. However, this new auditorium is simply gorgeous for piano recitals and smaller chamber music concerts. It really feels like a step back into time, to when so much of these repertoires came into existence, in visually sumptuous and acoustically lively spaces that allow both music and conversation to spark.

For an immersive experience, there is nothing quite like this new hall. Let’s hope the venture works out, as it is a stunning addition to the city.