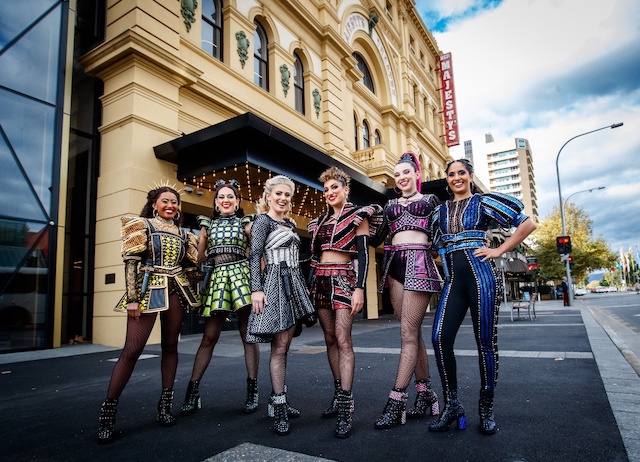 It is most unlikely that Henry VIII would have recognised any of his six wives in the  six young pop singers, dressed in a form of Tudor costume which showed far too much leg to be decent, and who moved and sang with a freedom that young ladies in Henry’s court could never have exhibited. But he could well have been delighted with the wit, exuberance, movement and energy they displayed. It was true ensemble theatre, reaching out directly to the audience who were captured from the first Divorced – Beheaded – Died: Divorced – Beheaded- Survived, mantra which began the opening number.

The Queens are competing to see who had the worst of it in their marriage to Henry VIII. Katherine of Aragon (Phoenix Jackson Mendosa) Anne Boleyn (Kala Gare)  Jane Seymour (Loren Hunter) Anne of Cleves (Kiana Daniele) Katherine Howard (Chelsea Dawson) and Catherine Parr (Vidya Makan) begin the contest, individually  telling her story in song. Through their stories each  character is revealed, from the giddy Anne Boleyn, to the obdurate Katherine of Aragon. Anne of Cleves, rejected because her appearance ‘did not match her profile picture’ makes a sensible and pragmatic choice to retire from the contest back to her comfortable life in the country. The sad story of Katherine Howard, abused from childhood, differs from the life of Jane Seymour, who provided the male heir Henry so desired, but who then died soon afterwards. Her  show stopping number ‘Heart of Stone’ was a powerhouse of emotion.

Catherine Parr, the one who survived, proved to be the wisest of them all, leading them to the realisation that they were not just ex-wives, but women in their own right. This brought them to their triumphant songs Six and then the closing MegaSix, sung as the audience delivered a standing ovation.

The lighting wrought wonderful changes in what is a simple set, the music combining medieval riffs with modern pop set the right mood. The professionalism of the entire cast produced a wonderful night of theatre.

It’s a sassy, sexy, spectacular and great fun. A short season so book your ticket for SIX early. It would a shame to have missed it.