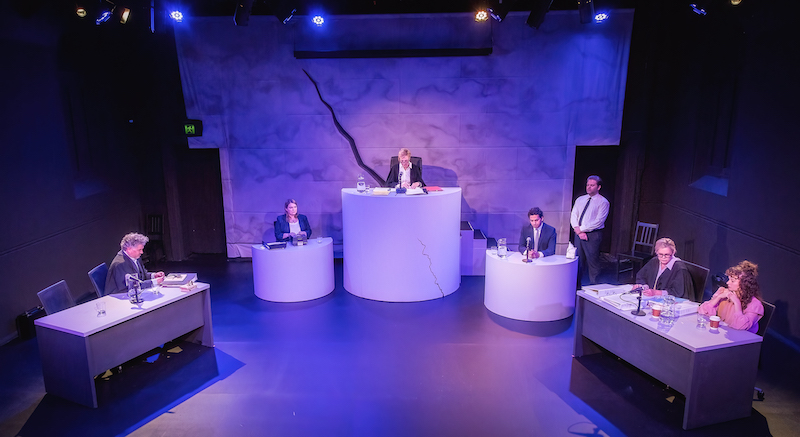 Red Phoenix Theatre and Holden Street Theatres
October 20-29
Have you ever thought that doing jury duty would be an interesting experience, where the facts of the case would clearly indicate the correct verdict? You may not think that ever again after seeing Terror, which, seen in a courtroom with judge, defendant, prosecution, defence counsel and witnesses, explore the question of the guilt or innocence of Lars Koch.

Written by Ferdinand von Schirach, who practised as a criminal barrister for many years in Germany, before turning to writing, the play involves not just the actors, but the audience, who vote, at the end of the trial, as would a jury.

I am reluctant to give away too much of the story, so as not to ruin the impact on those who are still to see Terror. What I can reveal is that it totally engages the audience while raising more questions than answers.  As the Directors, Brant Eustice and Tracey Walker note: Every Answer is Wrong. Conversely, every answer is right.

As we have come to expect in a Red Phoenix production the staging, and acting meets a high standard.  The Presiding Judge (Sharon Malujlo) begins by instructing the jury (audience) to judge the case only on what is heard in Court. She continues to preside over proceedings with a charm and tolerance not always evidenced in such situations. Both Prosecutor (Rachel Burfield) and Defence (Bart Csorba) clash and spar with vigour and both  sum up in the final part of the play, with strong conviction and arguments.

The main witness Chrstian Lauterbach (Peter Davies)  brings a wonderfully droll touch to the proceedings, especially in his interaction with the Judge. Here rigid military discipline meets legal need for clarity. The defendant Lars Koch (Fahad Farooque) is a man totally convinced that his is the moral right, revealing in his demeanour and answers a sense of possessing a superior moral intellect.  The witness who could never agree with him Fraziska Meiser, (Kate van der Horst) plays the heart broken widow, with a simple pathos. Two minor characters Stenographer (Ruby Faith) and Guard/Baliff (Samuel Creighton) added to the sense that this was a Courtroom and we were the ‘people judges’ in a trial.

Terror involves the audience  members in a unique way, demanding that they be drawn into the immediate drama of what was, in reality, a serious tragic incident, at the same time deciding the future life of a young man. This is the stuff of the society we inhabit. This is the stuff that makes theatre such an important part of our culture.