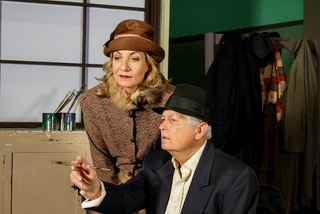 The Pitman Painters
Presented by Therry Theatre
Arts Theatre 18-27 August
Based on the experiences of a group of coal miners in England in the 1930s this play brings to life the kourney of men whose idea of art was a ‘picture of a flower, or an animal’ to painters of some skill and renown, under the guidance of Robert Lyon, played by Chris Leech with wonderful understatement.

The script by Lee Hall demonstrates a vocabulary and expression at times more sophisticated than one would expect from men with little education, but it serves to highlight their growing understanding of just what art may mean; what it says to them, and how their own painting brings a sense of fulfilment. This exploration of the meaning of art is further developed in the second act which reaches into the changes in society after WWII.

Susan Parks as the socialite Anita Canala, who plays patron until her interests lead her elsewhere, is a contrast to the down-to-earth miners, while the young Lad (Liam James) who is allowed in the group under sufferance proves more perceptive than the rest of them. There is a delightful discussion as to whether a painting of a Blob has deep meaning, or is just a Blob! As diverting is the miners’ reaction to the introduction of a live model, played delightfully by Veronica Wlodarczyk.

‘Does your mother know you are here?’ asks one outraged miner.

The set is designed to show the somewhat forbidding environment of a coal mine, as well as the art-work of the men, and their teacher’s early attempts to introduce them to ART. Unfortunately, at times the actors are hidden by the easel, so that while the voices are heard the faces are not seen form some parts of the theatre.

The cast as a whole is excellent, and the director Geoff Brittain is to be congratulated.

The Pittman Painters is a play that will set you thinking about art, and the question of whether there is a wealth of unrecognised talent among people we would not normally judge to have creative ability. There’s a lesson to be learned there.