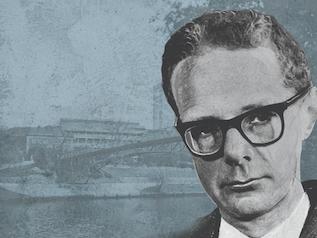 Watershed promised much. It delivered in spades.  The death of Dr Duncan, fifty years ago, caused outrage throughout Australia and overseas, not because of who he was but what he was –  an academic with a respectable middle-class pedigree. His death could not be discounted as being that of a loser ‘poofter’, a person of no real value to society.

The oratorio’s opening is stark and confronting. Images of the Torrens and its surrounds, the figure (dancer Mason Kelly) attached to rope from the ceiling, slowly descending, twisting and turning pushed and pummelled by the bullies until eventually he comes to rest in the water of the river. This is against a large image of Dr Duncan, where his face reflects what could be interpreted as horror, disbelief, anger, but not fear.

The initial aftermath of his death is public outrage. Outrage at his death and the corrupt police investigation. This outrage in turn leads to legislation decriminalising homosexuality acts. While the fear of prosecution and blackmail was removed, the legislation did not eradicate  all of the prejudice against the gay community, nor the bullying and bashings.

In the final part of the oratorio it looks to happier times when gay people will be respected, accepted, and their relationships seen as based on love. We are back at the Torrens where two young men, obviously in a relationship sit together, as the passersby are totally unfazed. Once again the young man is attached to the rope and is now drawn up to the sky, a symbol of reconciliation, and acceptance.

Success of this work lies with many people; the librettists who delivered a frank stark rendering of the story, with no regard to the sensitivities of the faint hearted, the music by Joe Twist, which  is at times sublime, at times merry, at times sombre, but always fitting the words and actions on stage, and which, in its variety, is still all of a piece, Christie Anderson, musical director, conducted the small orchestra and the Adelaide Chamber Singers with assurance. The musicians excelled, as did the Adelaide Chamber Singers, showing their depth of talent in the choral numbers and in the soloists who stepped out from time to time. The three male soloists, Pelham Andrews, Ainsley Melham  and Mark Oates, representing various characters in the story, were vocally and dramatically exemplary. The dancer, Mason Kelly, even when in drag, added greatly to the overall dramatic impact.

So this long anticipated oratorio, so unlike the traditional religious oratorios, delivers its message with artistic and musical integrity, appropriate for modern times.