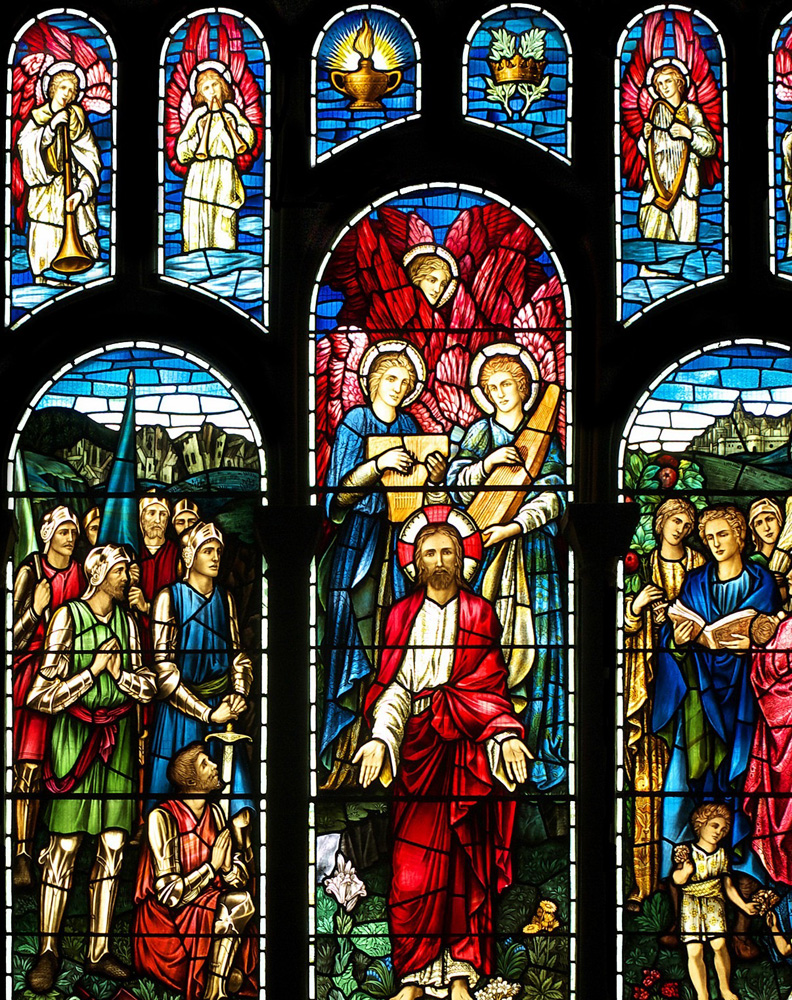 It is so interesting to know that Adelaide has the largest collection of William Morris artworks outside of Britain, and that a major part of this collection consists of five magnificent stained-glass windows in All Souls’ Church in St Peters. Beautiful Medieval-inspired figures and biblical scenes of the highest artistic quality, they incorporate depictions of musicians playing psalteries, harp, shawm and trumpets as well as groups of singers. For anyone interested in the Arts and Crafts Movement in Britain, of which Morris was a central figure, they are essential viewing; and an opportunity to learn more about them comes in a talk that accompanies Musique Vivante’s inaugural concert in the church on Sunday 29th May at 2pm.

Entitled ‘Revival!’, this concert celebrates the Arts and Crafts Movement and its revival of early music through music of François Couperin, Hotteterre, Telemann and other Baroque masters.

Briefly, we might look here at William Morris’s musical connections and find out how he came to be associated with the early music movement in the latter years of the nineteenth century. In a nutshell, it arose through his contact with Arnold Dolmetsch and George Bernard Shaw, and in the context of a rich confluence of artistic, social and philosophical ideas that made up the Arts and Crafts Movement at this time.

Morris, who enjoyed music and who according to Shaw possessed excellent ears and a fine musical voice, sang medieval chant in a society at Oxford along with the artist Edward Burne-Jones – whose great mythological canvas, ‘Perseus and Andromeda’, is familiar to visitors of the Art Gallery of SA. He also wrote lyrics for socialist songs and described how ancient music affected him, conjuring pictures “of the wild-woods” and evoked memories of visiting cathedrals in France and hearing choirs singing canons.

He met the Arnold Dolmetsch, 24 years his junior, through a mutual artistic friend, the architect Herbert Horne who at the time was writing a book on Botticelli. The French-born Dolmetsch had seen historic instrument in the British Museum’s collections, and on the strength of his interest Morris encouraged him to begin collecting and restoring old instruments. Dolmetsch immediately set about doing this, and no sooner was he also making his own instruments: first a lute and then a harpsichord decorated in typical Arts and Crafts style. Known to this day as the ‘Green harpsichord’, it was a much celebrated exhibit at London’s Arts and Crafts Exhibition in 1896 and was lacquered in green on the outside, and richly adorned with painted designs of fruits, ribbons and a peacock on the inside. The most special touch was a composition by Henry VIII in sixteenth-century notation running around the edge of the soundboard. This marvellous eight-foot instrument marked Dolmetsch’s debut into the Arts and Crafts Movement.

Morris attended some of Dolmetsch’s early music concerts then happening in London, and Shaw observed that he very much enjoyed these. Later, the two were to have collaborated on a publishing venture to collect up all of Henry VIII’s compositions, although due to Morris’s failing health this never eventuated. On his deathbed, Dolmetsch came around to play a pavan and galliard by William Byrd on a pair of virginals he had made, which apparently lifted his spirits.

My own interest in the Dolmetsch family came about through viol lessons I had with Arnold’s youngest daughter, Nathalie. I was only 13 or 14 years old when my father, David Strahle, a scientist with especially keen amateur musical interests including early music, arranged family lessons for us at the Dolmetsch home in Haslemere, England. That meant all of us – my sister Carrie and brother Stephen included – had to pile in the car every other Saturday and drive there from Camberley. I remember first setting eyes on the Dolmetsch house, a wonderfully bohemian haven of music and free-living, and not at all luxurious. Harpsichords and various other instruments, both original and made by the Dolmetsches, proliferated the large front room. What particularly caught my eye was a very Romantic looking oil painting of a tropical jungle scene sitting on the main wall, with DIY-looking bookshelves either side made of timber slats placed on bricks. Everywhere the spirit of AD seemed to linger, but of course he had long since departed – in 1940 at the age of 82.

Nathalie was a kind, gracious and infinitely patient teacher. Insisting like our father that these would be group lessons, she had us all sitting around in a circle and playing simple dance pieces after just a few simple words of introduction on how to hold the instrument and the bow, how to glide the bow across the strings in a fluid ‘wristy’ manner, and where to place one’s left-hand fingers on the fingerboard. Pieces we played in those first lessons included La Bergamasca, Hachas and La Folia – pop music from the sixteenth century. Having been taught years of solo piano lessons back in Adelaide, I found this approach surprisingly novel and fun. But actually it was no different to what we were doing all the time in our own home, that is, playing music together as a family mainly around the piano, according to our father’s ethos of participatory music-making.

In addition to these group lessons, which lasted two years, Nathalie suggested I also had lessons on solo viola da gamba. These were to be taught by her daughter, Teresa Budd. She and her two children shared the Dolmetsch home at this time – and I remember these youngsters racing around lawlessly through the house on their tricycles. I had a year of solo lessons, learning pieces that Teresa gave me from her mother’s tutor on the viola da gamba, a marvellous instruction book published by Schott that draws on primary source advice from Christopher Simpson, Thomas Mace, Marin Marais, Jean Rousseau and Hubert le Blanc.

During our visits to Haslemere, I also remember the family speaking a strange kind of French – seemingly a dialect of their own that came from Arnold’s upbringing in Le Mans, France, but may have had a Belgian influence owing to his years in Brussels as a young man studying violin there at the Conservatoire under Henri Vieuxtemps.

We saw a little of the elder sister too, Cecile Dolmetsch, who ran the regular Dolmetsch concerts in Haslemere and was known for playing the five-string French pardessus de viol. We did hear a little about their brother Carl, who played the recorder and ran the family instrument-making business in the village; and occasionally there were hushed words about Rudolph, the highly talented older brother who was tragically killed in the war when a torpedo hit his ship. He had been a very fine and promising harpsichordist, we learned.

Nathalie was a fine gamba player and a noted scholar in her own right. She wrote the very first book in modern times on the viola da gamba, published by Hinrichsen in 1962. On the dedication are inscribed the words: “To the memory of my father, inspired pioneer in the restoration of the music and instruments of the sixteenth and seventeenth centuries.” In all, Nathalie authored around a dozen publications on early music during the years 1950-1982, including articles in The Strad, Chelys, Galpin Society Journal and The Consort. I always thought she was a marvellous writer and scholar who deserves greater recognition.

I imagine that Natalie additionally learned much about gamba playing from her mother, Mabel, who was an accomplished player and major part of the family consort. She was Arnold’s third wife and had interests spanning Asian and African music and dance. In a similar way, our mother, Glenys Davies, cultivated wide interests and ultimately joined in our family consort too, playing tenor viol. An artist who taught art and craft, she had us three young kids painting and drawing all the time at home, and she opened our eyes to many aspects of art history, including the Pre-Raphaelite movement.

To my knowledge, ours was the only family who learned from the Dolmetsches, at least during the time we knew them; and in our strange antipodean way I think we took delight in following in their unusual footsteps. Sometimes we would costume up for Elizabethan themed concerts, just as they had done. For me, it has been special to have known and learned from this extraordinary musical family. They were wonderfully original, not say eccentric; and in the era that I was growing up in – the 1970s – they were little different in my mind to rock artists such as Led Zeppelin and Jethro Tull. Indeed, it seemed perfectly right to me that, along the leafy road we drove every fortnight to Haslemere, happened to be Headley Grange, the ramshackle mansion where Led Zeppelin were recording many of their albums at this time. To my young ears at the time, their recorders and folk style in songs like ‘Stairway to Heaven’ sounded curiously akin to the consort pieces we were playing.

To put all this in larger chronological context it becomes even more bizarre, when I think about it, because it means that the father of my teacher was born in the same year as Puccini, in 1858. What a strange fact – this was before Debussy or Wagner were born. Not only that, the violinist whom AD learned from as a young student in Brussels, Vieuxtemps, was a child when Beethoven was alive.

Certainly, what we can say is that the early music movement stretches back a great distance. Yes, it has come a long way since those pioneering days; and further major strides were being made in the 1970s with Gustav Leonhardt, Nikolaus Harnoncourt, Frans Bruggen, Jordi Savall and other luminaries. But this is to take nothing away from Arnold Dolmetsch’s pathbreaking rediscoveries in the field of historical performance all those years ago, and the dedicated work of his family spanning many decades.

It all contributes to the endless fascination and layered history of early music in the modern era.